started a topic about 2 years ago

I also meant to add - I think it would be brilliant if the plugin more clearly showed when the microphone was open / on air. Perhaps if the microphone button changed to red or something?

The red 'mic on' light is a great idea and a feature request I made.

thanks! glad there is wider support for this. I imagine coding the button to go red would be about as simple a feature implementation as you could get, but massively helpful!

I am having the same trouble.

Have an analog mixer connected via audio interface to PC. If I try using the PlayItOut Mix I get no end of trouble, In the end I think I have the output set to USB Microphone (might be USB Speakers, I will check) in the plug in. Most times though, the microphone input does not get sent to the broadcasting stream.

Is it worth using BUTT for the actual broadcast part?

said about 2 years ago
Also, can anyone get the 'press to engage' mic function with a MIDI controller - this is where pushing the button turns the mic on, but where the mic is released (turned off) when you let go. This works fine with the mouse. As soon as I assign a MIDI controller instead of the mouse it won't work. The mic turns on OK but doesn't release when I let go of the MIDI button - really frustrating. The 'other' setting (push to turn mic on, push AGAIN to turn mic off), does however work. Quite frustrating.
S

said about 2 years ago
I'm not 100 percent sure about your setup, but I also use a mixer and audio interface into Play It Live. I fiddled for hours and could only get it working properly by using the 'loopback' function on the interface to get the music to play. Not all interfaces have a loopback function and I think you may need it. I did.
K

Thanks Simon, I don't think there is a loopback function but interestingly I did see loopback pop up a recording option on Audacity. I think the only way at the moment is to use a virtual cable or just get presenters using a USB mic into the laptop and monitor using headphones, which is annoying. Actually would that solution even work?

Have a look at https://support.playitsoftware.com/support/discussions/topics/5000089090

where I use a soundcard/mixer with "loopback" and PlayIt Live.

I didn't stress the point in that article but it is probably worth clarifying what "loopback" is and why you would (or wouldn't) want it.

Most applications for a sound card expect audio plugged into the card (microphone etc) to go to the computer and the audio from the computer to appear in the headphones or speakers connected to the sound card.

Often you want the sources plugged into the mixer to also appear in the headphones (so you hear yourself on a microphone and the audio from the computer mixed in your headphones).

The Yamaha AG03 has three settings (set by "To PC"), they are

It is "Loopback" that will send the PlayIt Live output (and local microphone etc.) back to the computer. 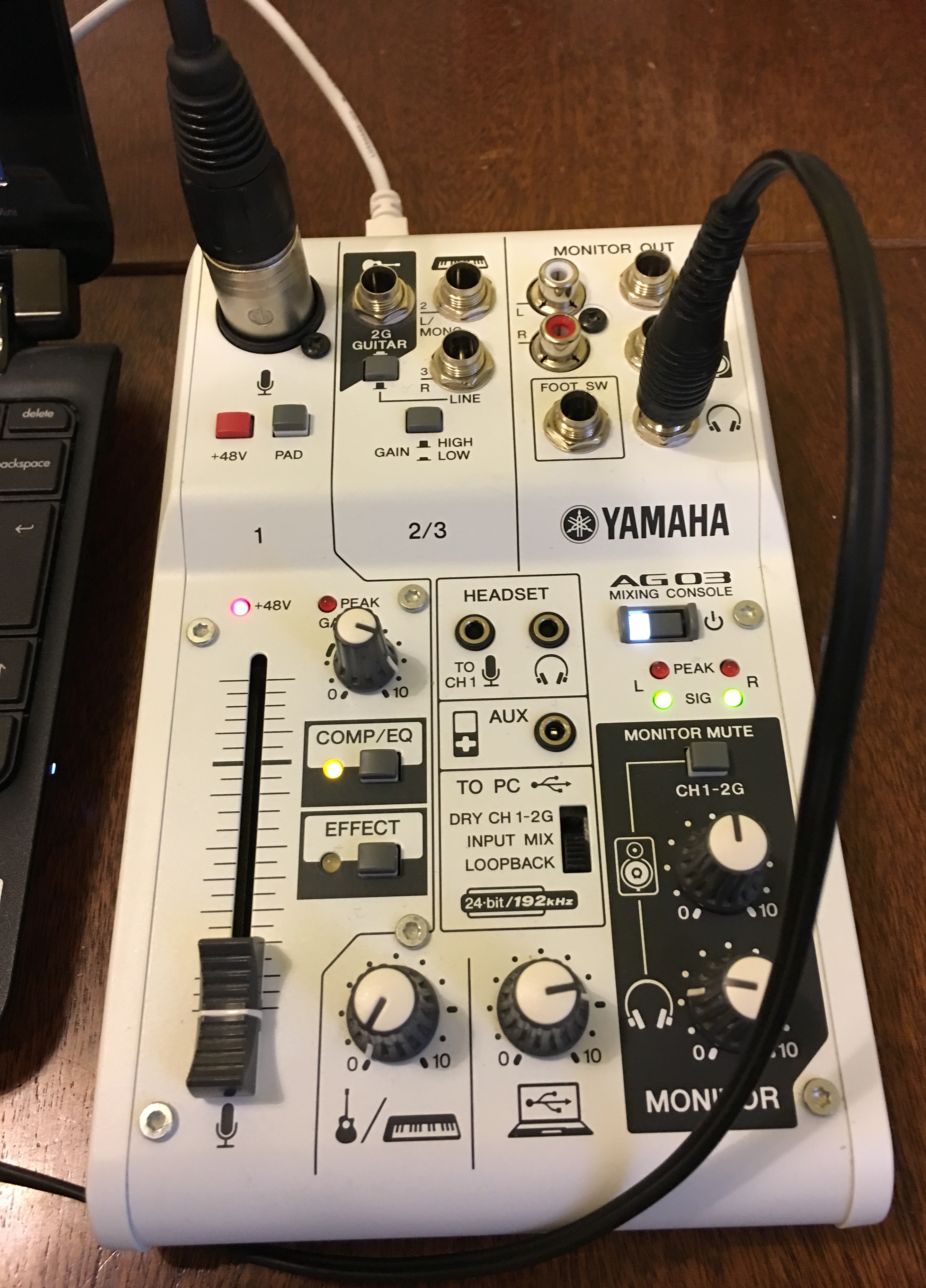 Some other soundcards incorporate a "loopback" function and it's achievable in some mixers with USB connections.

Yamaha made the AG03/AG06 for the streaming markets and it's the best product in that field I can find.

The Rode "Rodecaster Pro" is good if you want many microphones and only a single stereo audio from the PC (as with the Yamaha AG03/06) what neither allow for is a "cue" feed from the computer that is only heard at the mixer but not sent back to the USB output.

The problem is slightly compounded by PlayIt Live not really having a "headphones" output (as a mixer would have) although the Yamaha/Rode limitations would mean that whatever PlayIt Live does it wouldn't matter.

To a degree, whatever you do tends to end up with needing a "radio" mixer to get the best from PlayIt Live and a specialist mixer from a smaller scale manufacturer either with or without carefully selected sound cards.

I've been dabbling with PlayIt Live for a few years now and I ended up with this set up:

If I were buying all new now (and had the budget), I would look at a newer D&R product such as the Airlite or Webstation but I spent a small fraction of what these cost picking up my setup second hand.

Ok - so my chain is as follows.

Music from PlayIt comes into Mixer so presenter can hear and adjust levels accordingly.

Goes from Mixer via USB I/O back into PlayIt.

If PlayIt Main Mix is selected, stuttering and doubling up on the presenter when PTT is open. Basically a Larson effect. When PTT is not being pressed, music plays fine.

The Microphone mix plug in is set to the USB Codec interface as is the Audio Source to Broadcast.

Is there anything obvious that I could try please to fix the problem?

Well Kyle, that should all work very nicely.

If the PC has another sound output it is possible to make all "system sounds" go to that (set that as the default) to avoid PC "bongs" appearing in the PlayIt Live mix.

A further refinement is to put that PC sound output on another mixer channel and use it for PlayIt Live's prehear..

Thanks Mark, so I am guessing the reason I am getting the weird sound (almost like the XLR is picking up the output when PTT is engaged and doubling/sounding in delay) is that?

I have attached a couple pics of the streaming and input things I set up yesterday.

Edited to add: Missed the bit about USB sound card, yes it's just a behringer audio i/o which I have used for a few of friends who had fairly decent mixers but not with a USB function :)