started a topic almost 6 years ago

For a while, as the opportunity has arisen, I've been testing different multi channel USB sound cards.

Generally the multi channel sound cards sold are intended for use with programmes such as "Traktor" and so expect to produce a mixed output for the audience and a headphone pre-hear output for the DJ.

Hence USB sound cards like the Numark DJ IO or the Reloop Play have two stereo channels presented on phono sockets and one of those channels also on a headphone socket.

For PlayIt Live, in my view, the ideal setup allows for three stereo channels. These are "now playing", "next to play" and a cue/QuickCarts output.

Also, in an ideal world all three stereo channels would be presented on phono (AKA RCA) sockets as that is generally what mixers have as a connection and they are reasonably reliable.

The search for the perfect USB sound card lead me to ESI. They seem to understand the likely requirements and have made various cards with three (or more) stereo channels.

No longer widely available new but sometimes to be found on ebay, the ESI U46 (various versions available) is good. The U46 also has 2 inputs (intended for turntables with timecode vinyl but switchable for line level) and (critically) drivers to support ASIO and various operating systems.

I had some driver issues with the U46 (the newest one didn't seem to work under Windows 7 properly) but I found one that did work and the U46 works well with PlayIt Live. The U46 is powered via USB (no extra PSU "brick" needed) so ticks the boxes.

I have a laptop which I use with various music software (primarily Mixxx and PlayIt Live) and the U46 is a bit big to slip in a laptop bag so I was looking at other options.

If I were buying a new USB soundcard for a "static" setup, of the current USB soundcards, I would probably go for the ESI Gigaport HD+ which has 4 stereo outputs and sensible headphone options however that was a bit more than I needed.

The current ESI drivers downloaded from their website installed and worked first time on my Windows 10 netbook. There is a "helper" console with the software that allows level control (useful for headphones and PlayIt live) and the display also shows bargraph meters for each of the channels. 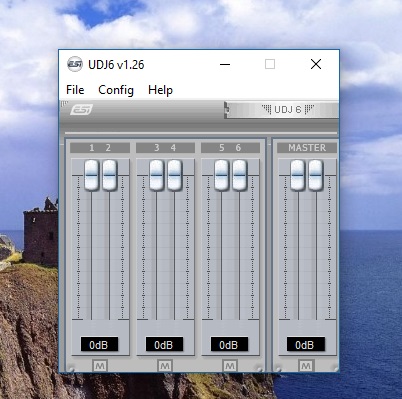 All in all, if you can get the UDJ6 (new or second hand) at an acceptable price I can recommend it for use with PlayIt Live. Definitely an 8/10 (having the headphone output also on phonos like the Gigaport HD+ would have got the last 2 points !).

I've now got hold of the ESI Gigaport HD+.

This is very similar to the UDJ6 but physically larger and with 4 stereo channels out.

All 4 stereo channels are available on phono sockets (8 phonos) and there are also headphone sockets for the first pair of phonos (1 & 2) and the whole mix (1-8). These are probably less useful in a PlayIt Live application. 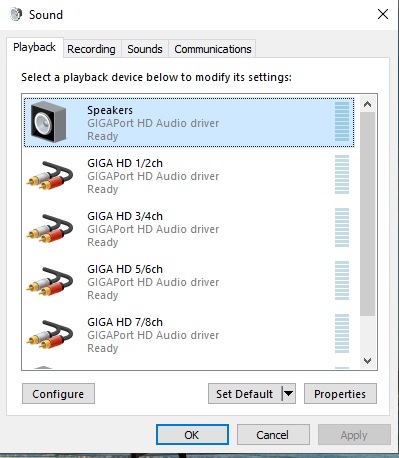 Rather nicely, it also has LEDs that show audio which is very handy while getting all the cables and channel configuration right. 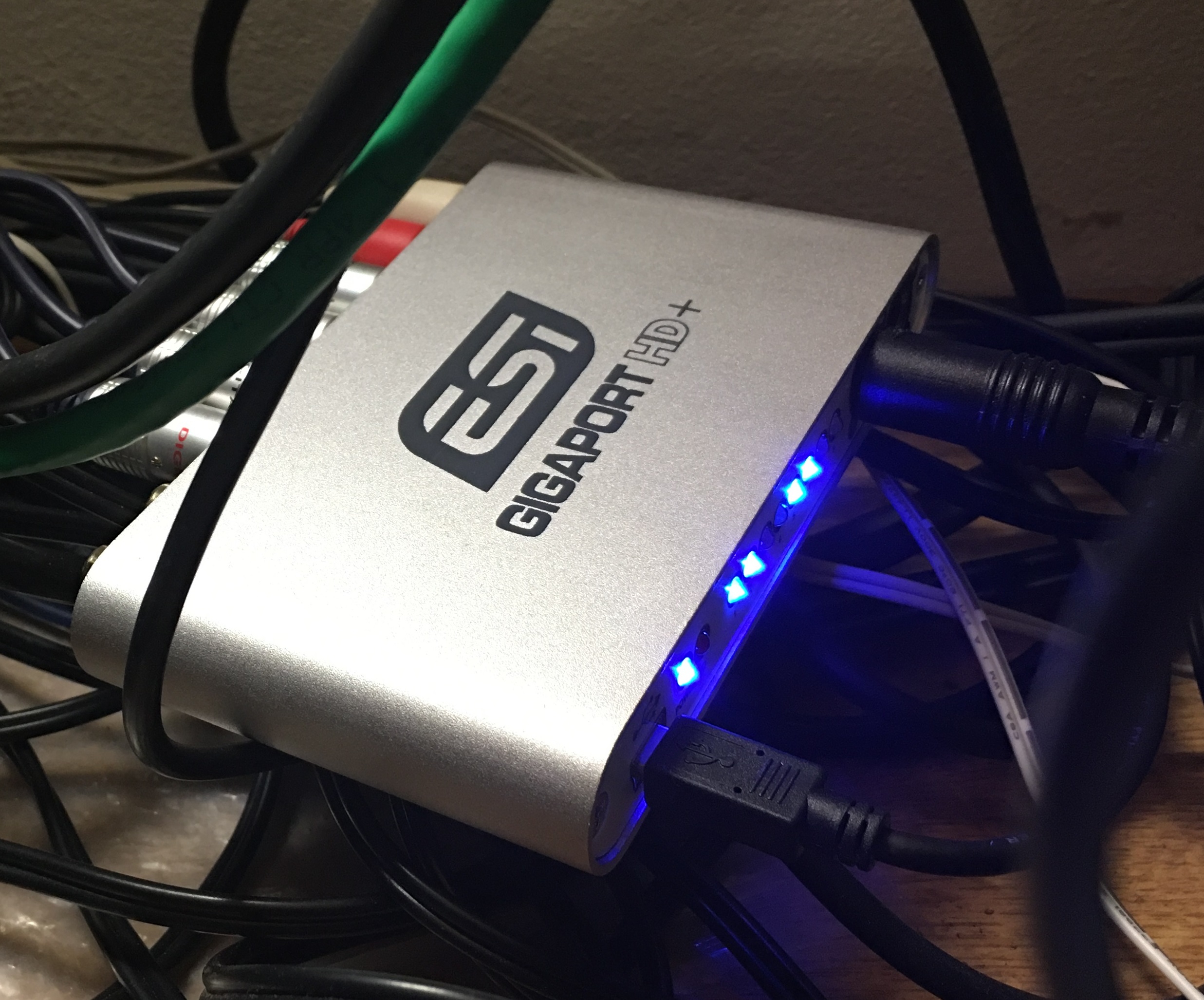 There is only one issue, a curious warning at PlayIt Live startup which I need to investigate, but it works well.

In my application I use 2 players, an output for Quickcarts and the final stereo pair for the prehear.

These go to 4 stereo mixer channels although the last one is never faded up.

All in all, this works very nicely.

Hello I have a problem with PlayIT Live since the change of a sound card before I have 2 behringer card UCA 222 I change for a card ESI Maya 44 USB + (new card) because it is a sound card with line-level entry, but in the same day there was a windows 10 update and since PLayIt Live Plante; the fault is that the audio input of my card freezes, at the beginning I think that it comes from my card and has force of test and configuration I realized that the problem comes from PlayIt Live because it is enough for me to relaunch it for that the problem is a rule. Do you think it would come from the last update of windows or the fact that I use PlayIT live in Free mode for more then 2 months.

Your Behringer cards are (I think) "class compliant" so should work without a driver.

You might also try an older driver. Although I am currently using the latest driver for the Gigaport HD + it worked with a Windows 8.1 driver. For your card that would be the 3.5 driver. 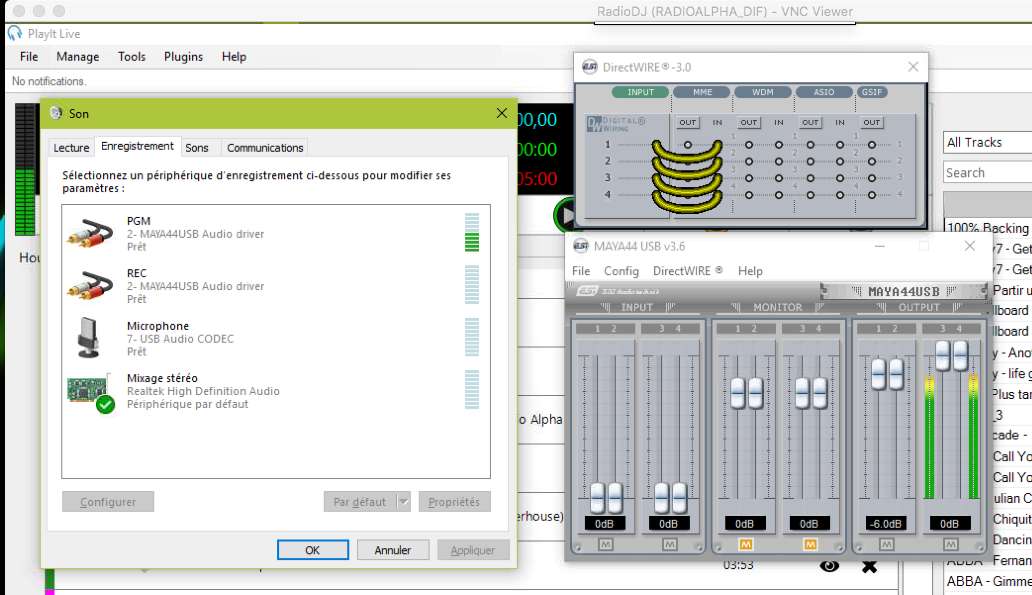 I do not have the ESI Maya 44 USB + but I do have on another PlayIt Live System an old ESI U46.

This has 3 stereo outputs and 2 stereo inputs.

Interestingly on the Windows (7) record screen it shows the three outputs (not the two inputs).

I've not been able to make the two inputs appear on the list. 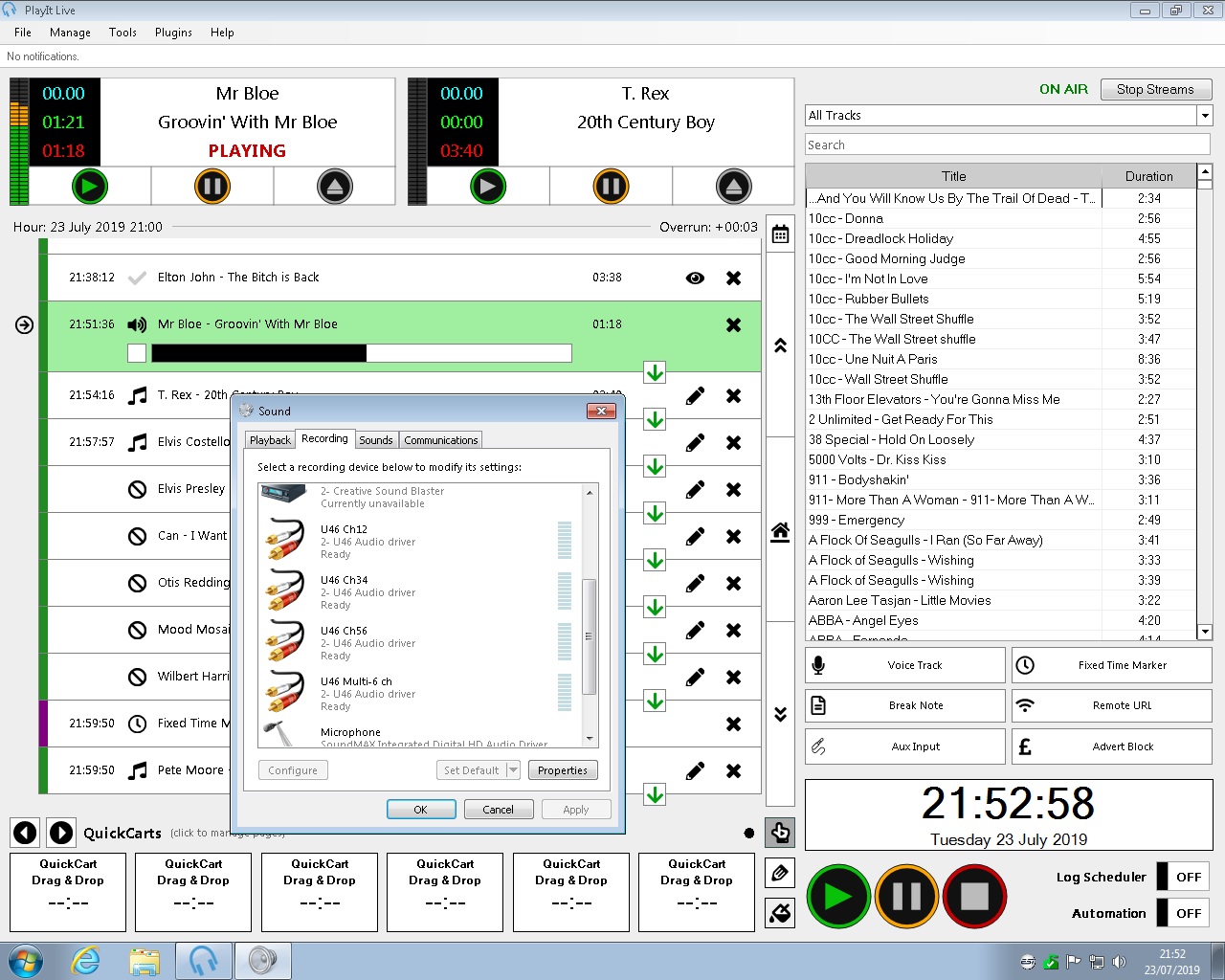 They appear in the same way in the outputs list 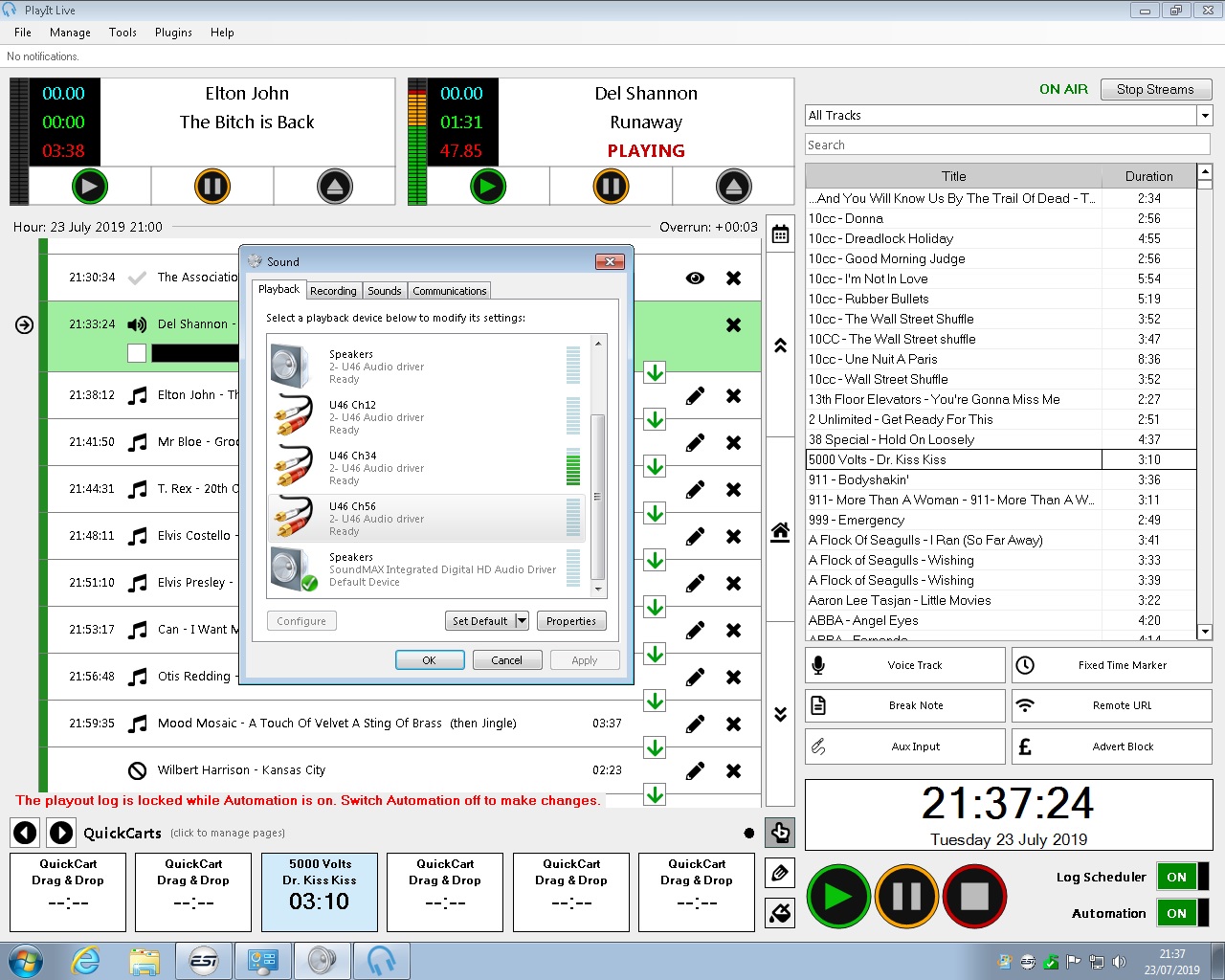 I also have a second sound card (in my case a Soundblaster), which I use as the input device. You could use one of your Behringer UCA 222 in the same role. 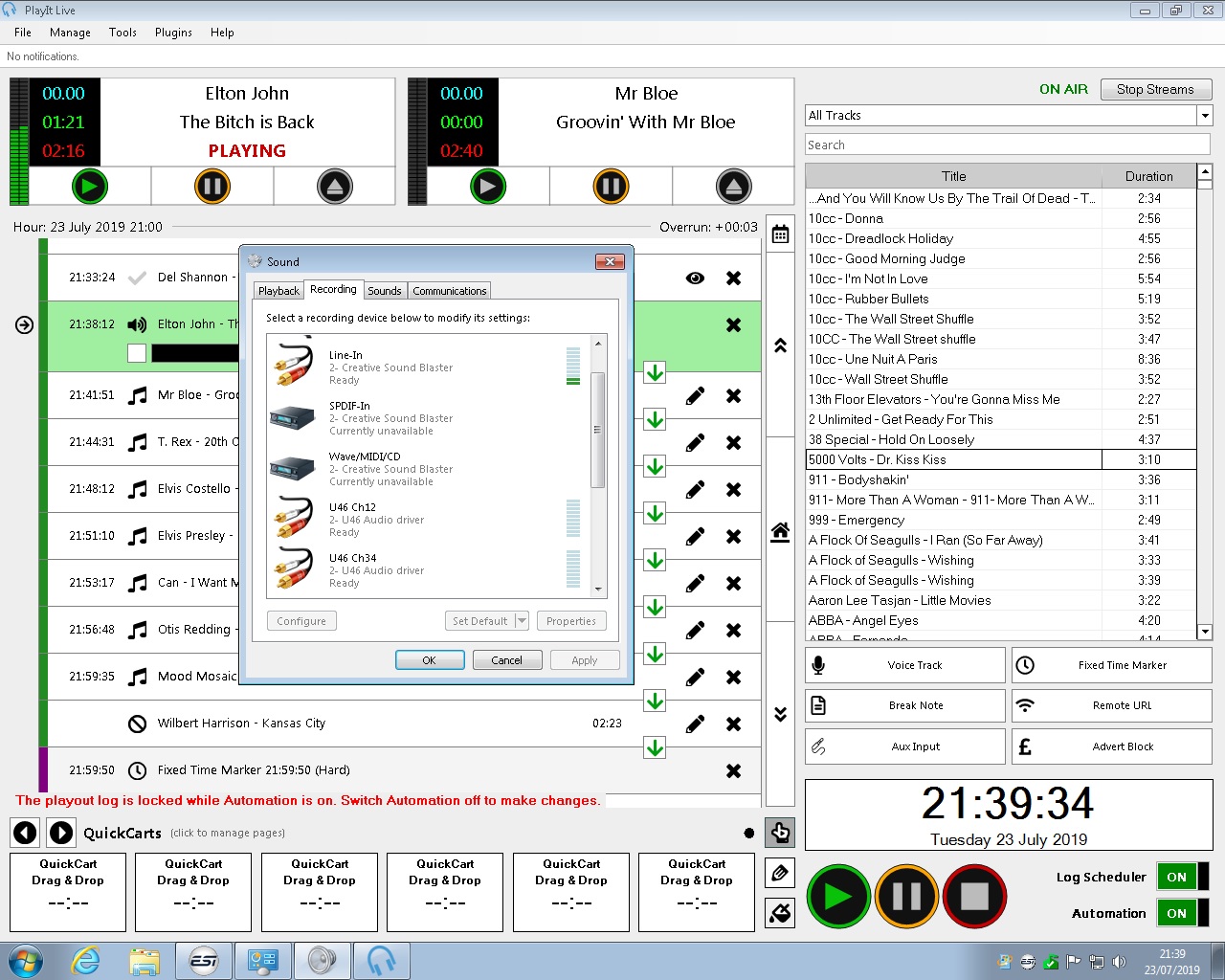