started a topic over 1 year ago

I have a small Part 15 transmitter that I use occasionally to broadcast music around my house/property. I currently use WinAmp for playout with the StereoTool DSP plugin (which is excellent, by the way) for processing.  I would love to use StereoTool with PlayItLive but it doesn't support DSP plugins.

Any chance on adding DSP plugin support in the future?

I did search the forum for anyone that has used StereoTool and found one post referencing it, but the OP wasn't having any luck getting his to work.

Still playing with it and really liking it!  Good job Jason! :)

While I've not tried it myself, I believe it is possible to stream from WinAmp using a sound card audio input. Whether this can be used in conjunction with StereoTool I don't know.

Otherwise, and excellent from my testing of the free version, Rocket Broadcaster can use VST plugins (but only in the paid version).

If I was doing anything beyond a test system I might well get the paid version of Rocket Broadcaster. It's probably the best "pocket money" streaming software overall.

Also worth a look is MB Recaster. The free version seems able to use plugins.

I've tried MB Recaster and that is also good, I like the "built in" server aspect of it so on a LAN you can connect directly without an Icecast/Shoutcast Server.

On the system I've tried Rocket and MB Recaster on I have a half decent hardware processor so I've no need for software processing.

Finally, while done at the player level rather that the mixed output, I like the PlayIt Live processing plug in. Well worth the price for a bit of AGC if nothing more.

Hi Mark!  Thanks for the reply.  I have a paid version of StereoTool for WinAmp (dsp plugin) so I'd like to use it in PlayItLive. I already have it set up and have a great sound with it.

I've not seen Rocket Broadcaster or MB Recaster and I have no real use for streaming. I just run it through the small Part 15 transmitter for my own listening pleasure.  I thought about trying Virtual Audio Cable and see it I could route through the stand-alone version of StereoTool to see if that would work. Has anyone tried that yet?

You will need a moderately decent computer by the time you do all this.

I did try a streamer with DSP at one stage but that seemed to run out of CPU power with my relatively ancient (or perhaps "vintage" !) computer collection.

I may try that when I have time to sit down and work with it again. I believe my system can handle the workload (6 core AMD proc, 8gb RAM, Echo Mia/Midi sound card, Win 10). I record and edit audio and video on it and have yet to have any problems.

One other note. I'm using mostly MP3 files for music and I listened to it with no processing and it was, shall we say, less than pleasing to my ears. On top of that, the levels of some of the mp3 files are all over the place with some being hot and some not. StereoTool takes care of that nicely.

Once your files are at roughly the same subjective loudness then processing will get the best from them in situations where you want reduced dynamic range.

Thanks again. I'll get MP3Gain and give a run on a few files (copies, of course) I know have level problems.

Also, if you haven't already, grab a copy of StereoTool and give it a spin. It's free unless you want some of the other features.

Good news!  The VBCable and StereoTool work very well together!  Now I have my processing to go with PlayItLive.  A nice full sound to enjoy on my Micro Radio Station :)

Would still be nice to have native DSP plugin support though. 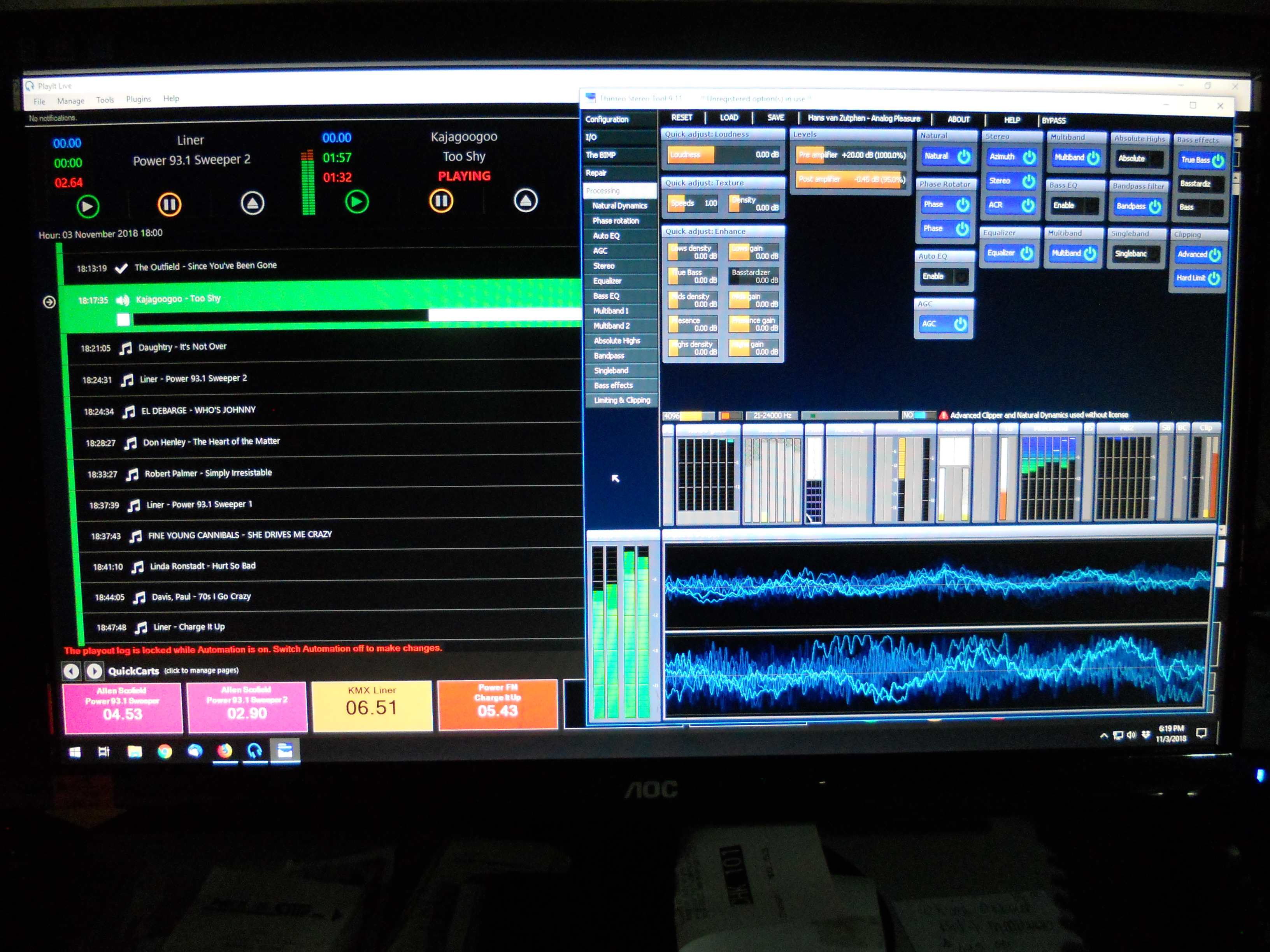 1 person likes this
Comments to this discussion are now closed!
More topics in Questions
See all 370 topics