started a topic 27 days ago

Having written up the poor man’s radio setup four years ago I’ve moved up the equipment “food chain” a little and I’ve now got a better setup.

I’ve got a better mixer, but for this write up the mixer (other than having enough channels to use four stereo channels for PlayIt Live and some microphone inputs) is irrelevant.

I now use the 4 stereo channel “ESI Gigaport HD+” card for output (as featured in a "half decent" multi channel USB sound card). 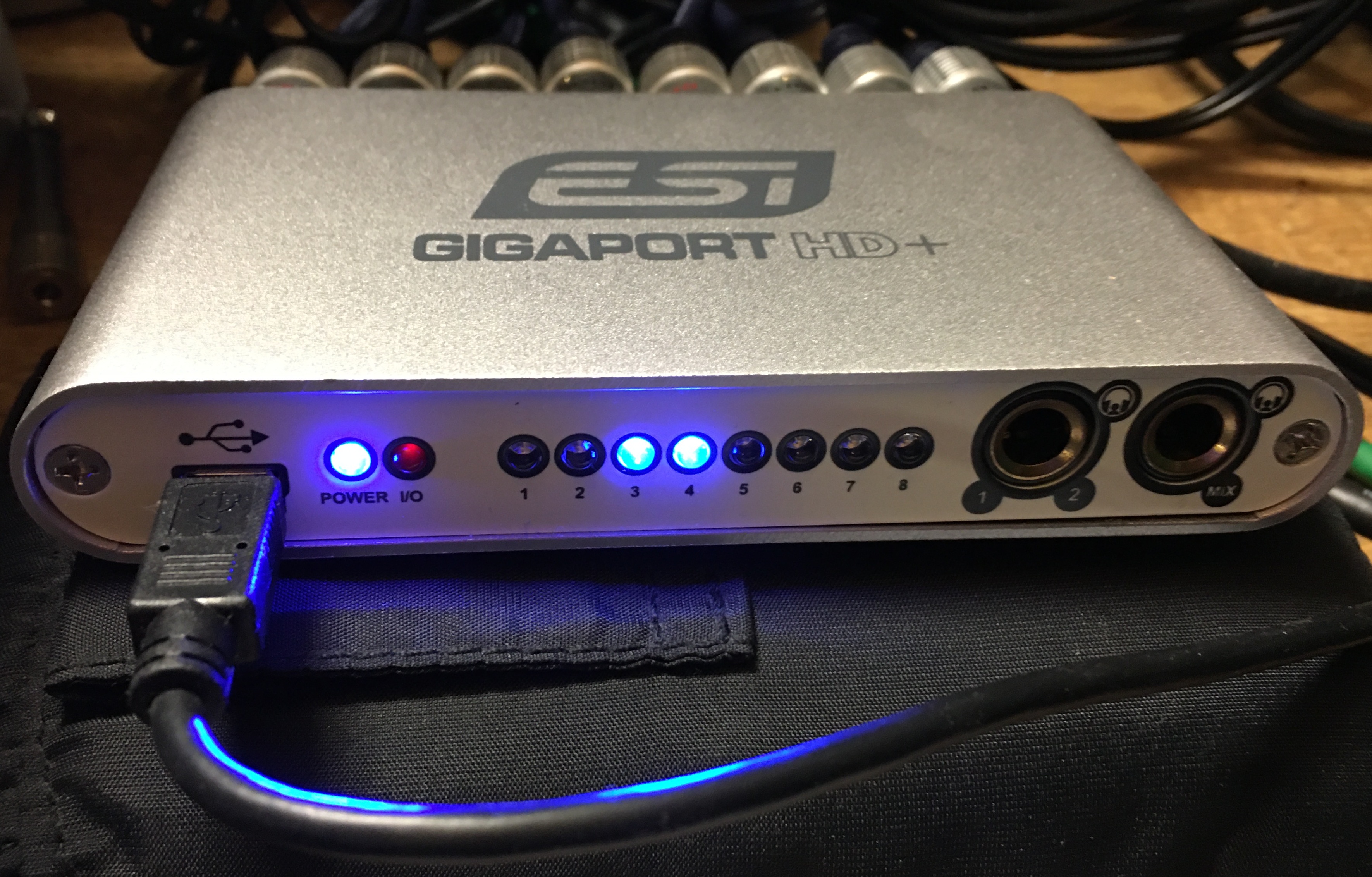 If PlayIt Live is in automation, if you use 2 players then these two channels should be left up on the mixer.

I leave the QuickCarts up as well but (obviously) in normal operation the Pre-Fade Listen channel is never faded up. This could be connected to an input on a channel with an alternative function (for example “telco”) and selected as requires. 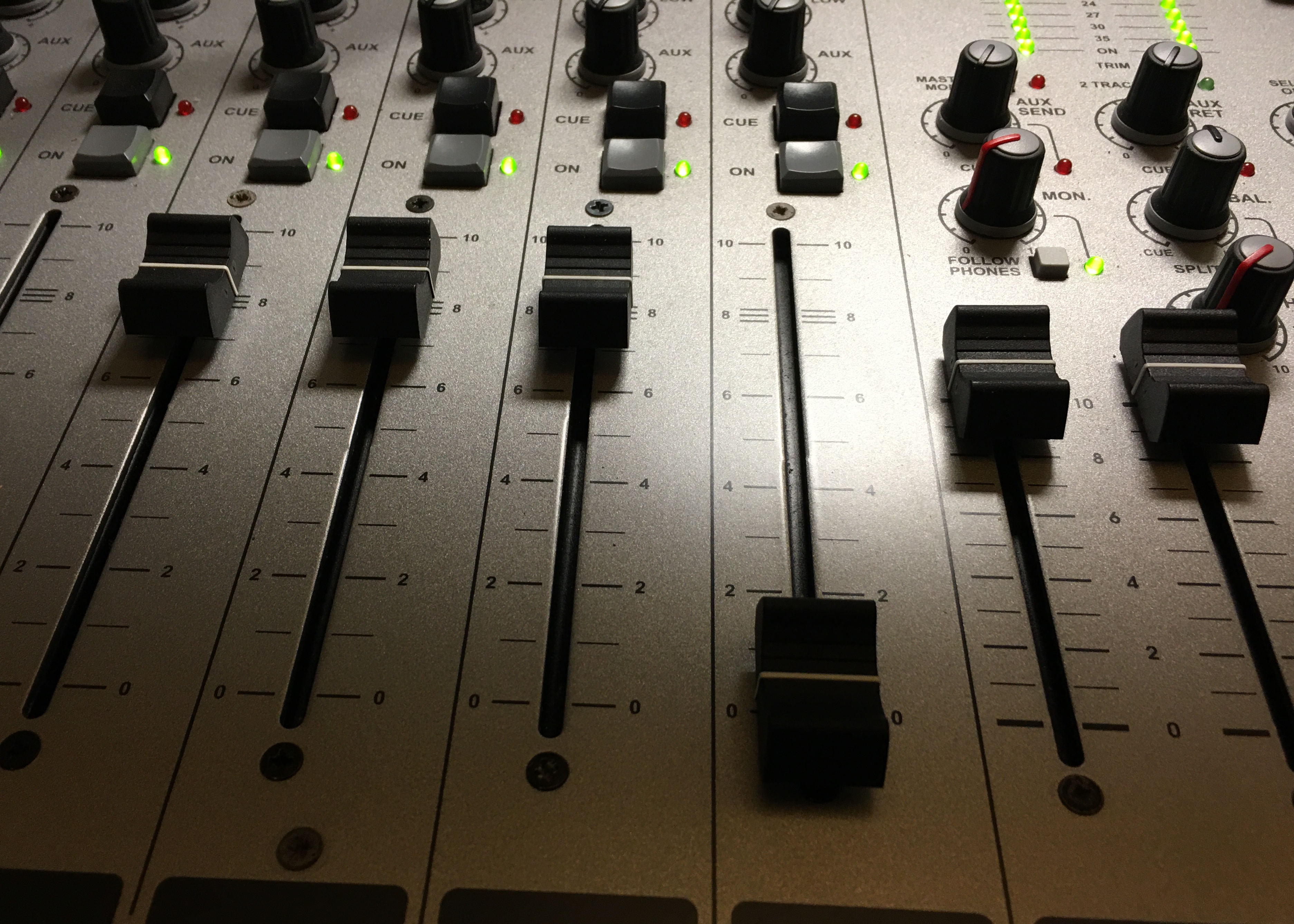 Once mixed as required, I use a separate sound card to return the mixer output to a computer for streaming (it can be the same computer but in my case I use a different one).

To allow a good level to be fed into the stream I use a USB sound card with hardware limiting. This is a rare feature on USB sound cards but I consider it essential to preserve quality on the microphone while allowing a good music/voice balance and a reasonable input into the streaming system.

I use an old Roland UA25 sound card but this needs modified drivers for Windows 10. 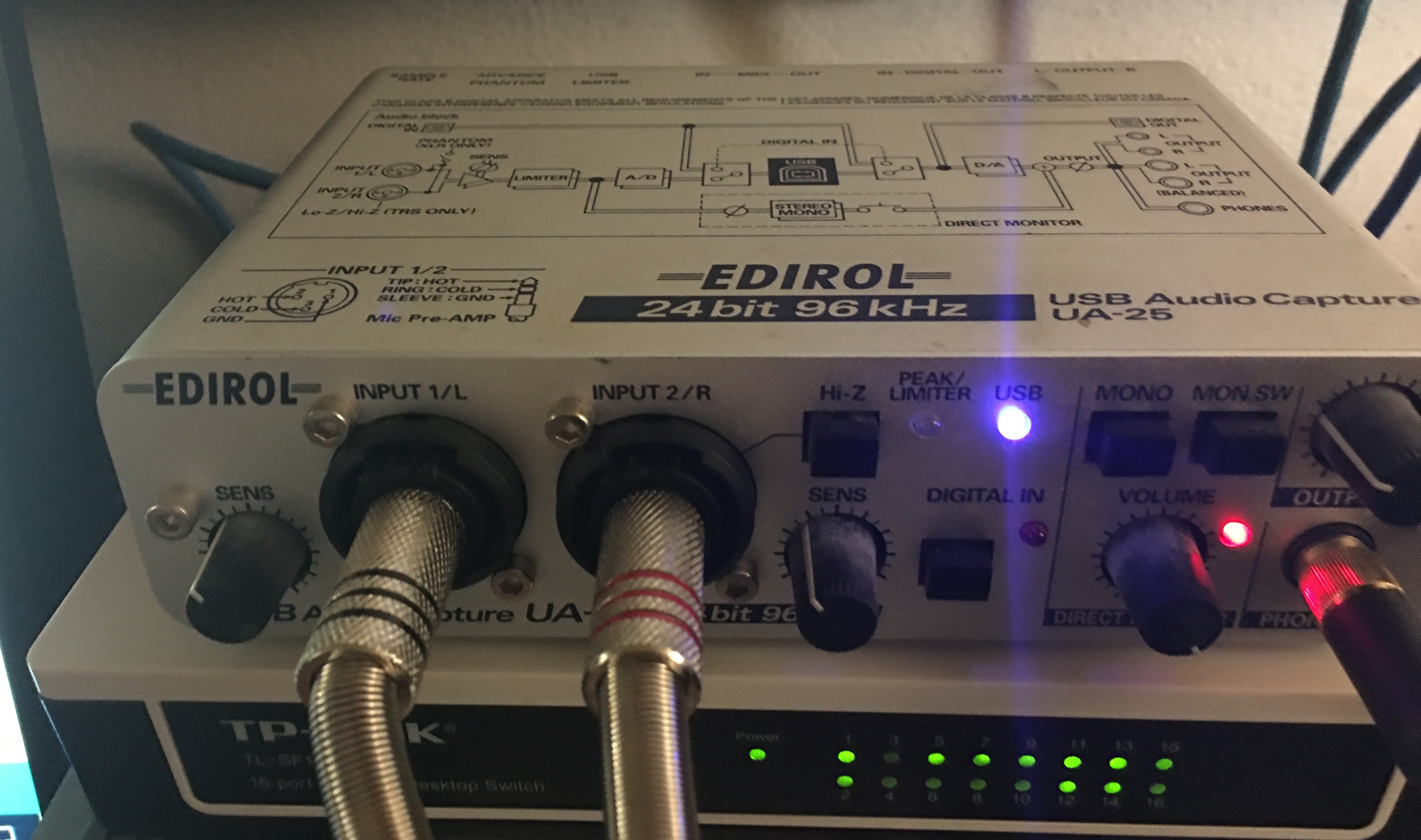 It works well but if I were buying a suitable card now I would consider the Roland Rubix24 as this has a hardware limiter.

For simple(r) applications this might be sufficient to use with PlayIt Live as both the input and output card as it has two stereo outputs (could be Players and QuickCarts). In this case, obviously, the PlayIt Live PC would also be used for streaming. 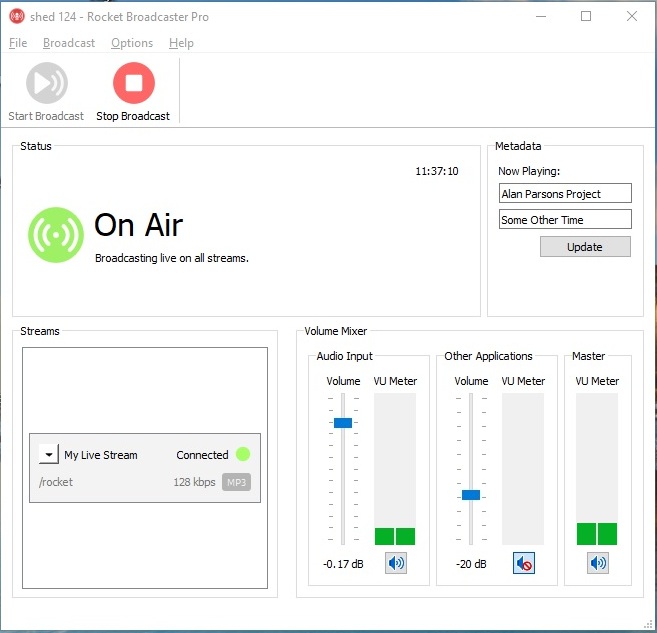 I use the suggested, free, JB Broadcast three band processor which works well with my library of music sourced from CDs of various vintages. I also use MP3 gain on the files when they go into the PlayIt Live library. 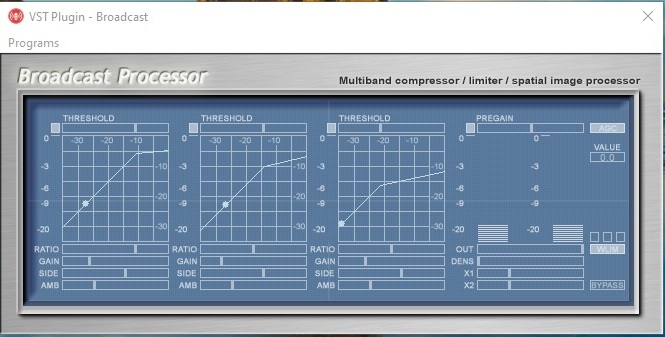 Collectively, this setup will run without intervention for weeks without issue.

The playout computer is an i3 laptop but the key to making it run smoothly seems to have been replacing the original drive with a solid state drive.

If you buy Rocket Broadcaster you may find that the pricing direct in your local currency is better than paying in another currency.

Nice.. Loving that set up. what mixer is that? am using a allen & heath, but it does not have cue, or on/ just mute, which kind of is the same. Am using two sound cards and soon will be changing to a Focusrite pro 40, as it has many inputs and outputs. Thanks for the post.

The mixer is a D&R Airmate ( https://en.audiofanzine.com/analog-mixer/d-r/airmate/ ) for a mixer similar to mine.

I bought it very cheaply second hand but it just has analogue inputs..

There is a new version with USB inputs which would be good for PlayIt Live but it's not cheap.

The D&R Airlite is arguably better for most applications with PlayIt Live and the Webstation also looks good.

These may be beyond your budget, if so, I previously had a Behringer DX1000 and the newer version the DX2000USB is excellent value for money and has most of the features you might want.

It isn't as well made as the D&R but it costs a lot less. The biggest drawback with the DX2000 is that the USB sound card only feeds one channel but you could combine it with another sound card to feed 3 or 4 more faders.

If you could get a decent second hand DX1000 I could also recommend that.

I can't comment on the Focusrite but do check it presents the channels in a way PlayIt Live can use. You probably need it to come with an ASIO driver to be OK.

I guess your Allen & Heath is a music mixer.

They had a couple of nice mixers in their XB series, https://www.allen-heath.com/series/xb/

It now seems to be down to one.

The XB10 was very good except for having rotary faders. https://www.allen-heath.com/ahproducts/xb-10/

I do wonder if they will do something to replace it but with linear faders.

For completeness, as none of the links give a decent picture of the original version of the Airmate I have, a photo (I can't get a good angle on it easily). 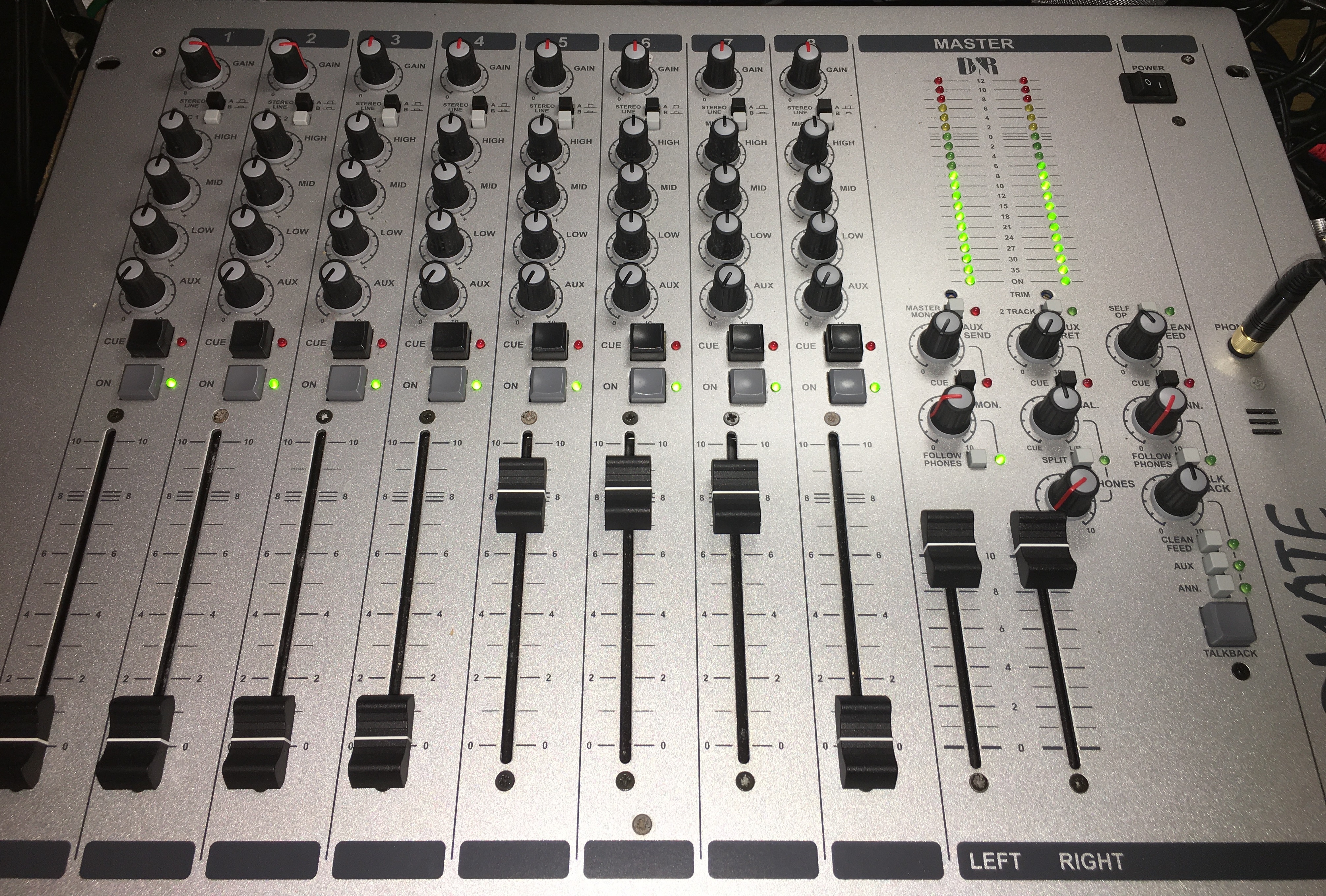 said 21 days ago
Thank you so much.. i did check it out, and as you said,kind of pricey the USB version. I was thinking about using the behringer xr18 with an imac for controls. And since it has many inputs and out as well as processors, it can be used as an usb sound card. But that is just a maybe. I really like how your mixer looks, and since i wll be using the focusrite, i think analog mixer would not be a problem for me. Simple, not too complicated for a beginer like me.
M

Although extremely powerful, I think for most radio style applications the Behringer XR18 would be tricky to use without physical controls.

I've never used one myself but I've seen people using them with an iPad or similar and for live music they work well but I would want a physical surface.

Possibly usable depending on what style of radio you do, the Rode Rodecaster is worth a look.

It doesn't (sadly) allow multiple channels of computer sound on different faders but potentially the phone connections could be used as additional channels.

I think if I were buying a mixer now and had the money, I would look at the Webstation as it has most of what is needed in one box.

otherwise I would probably buy the Behringer DX2000USB and a sound card.

said 20 days ago
I agree with you... i personally prefer a physical one as well. That behringer looks really sweet. I think that somehow am over thinking my set up. I just want it somehow simple, but yet to do exactly what i want. Lol. I know that is dificult for a budgt radio station. All i want to do, is being able to control the music volume from a channel, have 4 xlr phantom power input, and at the same time being able to record my voicetracks without having an extra mic or having to unplug the ones i already have. Lol At first i thought it was simple, but then, got it with reality, budget and features do not mix very well. The reason i was thinking the mixer i mention was becasue it also has a software for both, mac and pc, and i have extra imac i could use to control it. But, like you said, that would take the physical part of it. I was also considering purchasing a cheap touch screen monitor if i decided to go with that mixer. Thanks for your thoughts. It really help me to see things in a very diferent way.
M

Just to add a couple of other thoughts.

If the Rode doesn't suit then one other mixer which gets suggested for podcast production is the Behringer 1204 USB.

While generally not ideal for PlayIt Live (due to the limited number of stereo channels and lack of a "normal" PFL arrangement) it has the great benefit of individual one control compression on each of the 4 mic channels which is extremely useful with multiple contributors (particularly if they tend to get excited !).